Coffee and caffeine: The facts for our health

Are coffee and caffeine bad, or good for us, and how much should we actually be drinking?

Let’s look at the facts.

Fortunately for us, we’ve got some reliable data to review.

It’s estimated a whopping 85% of us consume coffee on a daily basis, with an average caffeine intake of 135mg per day – the equivalent of 350ml of filter coffee.

But caffeine isn’t just in coffee. It’s found its way into all sorts of food and drinks – it even occurs naturally in some foods like chocolate.

The chart below shows how much caffeine can be found in these every day food and drinks: 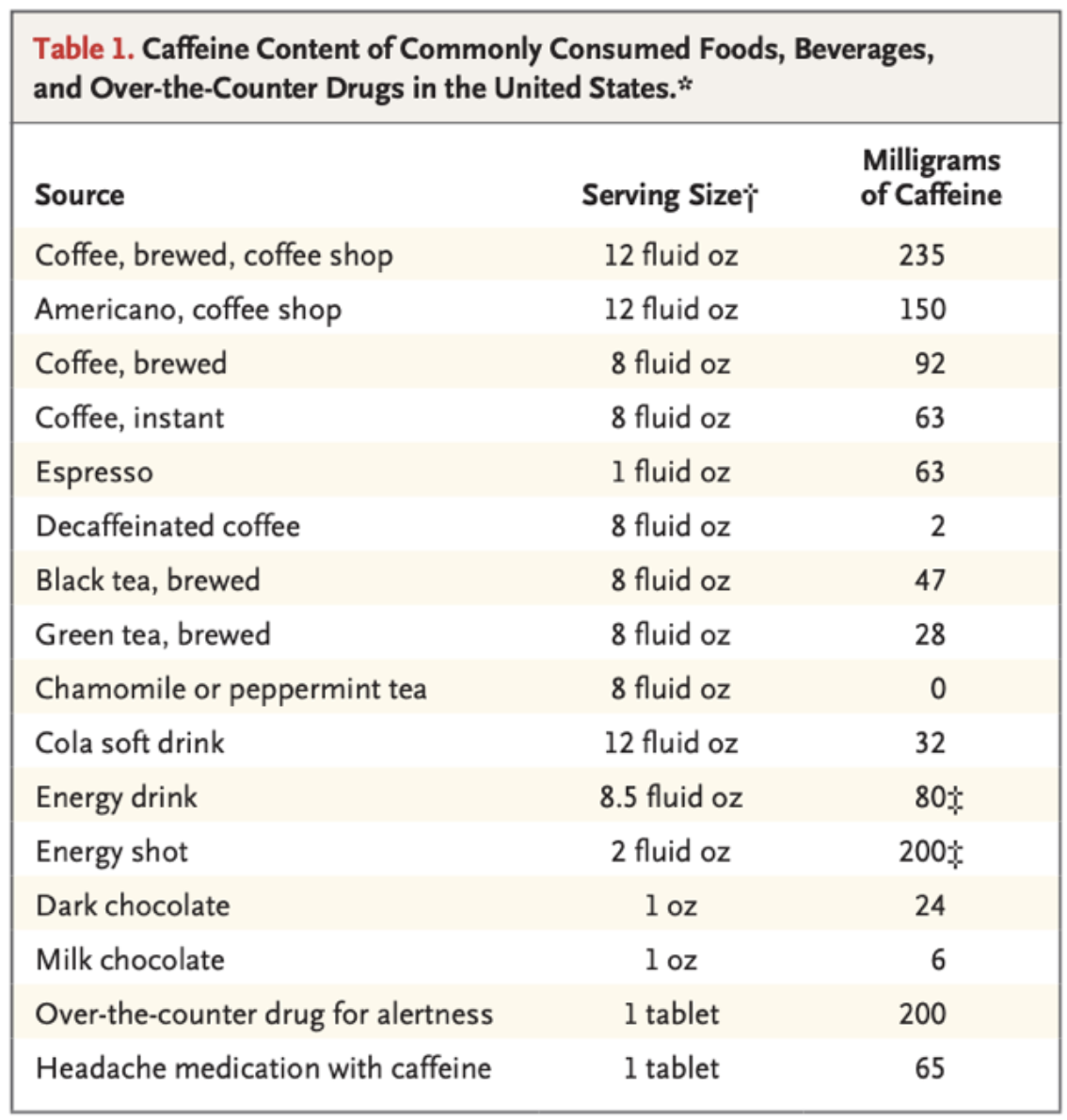 How does caffeine work?

Despite how you might feel after your first coffee of the day, caffeine isn’t a magical substance that just makes everything better.

There’s some science behind it.

Caffeine takes around 45 minutes to be completely absorbed by your body once consumed, with the amount of caffeine in your blood peaking between 15 minutes and 2 hours of consumption.

It doesn’t simply disappear though. The half-life of caffeine – i.e. the amount of time it takes for the amount of it in your blood to be reduced by half – is between 2.5 and 4.5 hours in adults, but around 80 hours in babies!

It’s fairly well known that caffeine increases attentiveness, reduces fatigue, and has effects on cognitive function, but the big question is…

What are the long-term effects on your health?

And while caffeine can acutely raise blood pressure in those not used to consuming it, tolerance quickly builds – often within a week – leading to no acute change in blood pressure.

Importantly, studies have shown no there’s no long-term effect of caffeine intake on blood pressure – even in those with pre-existing high blood pressure.

However, there’s a compound called Cafestol which can be found in high concentrations in unfiltered coffee (like French press or Turkish coffee).

This compound has been found to cause an increase in LDL (bad cholesterol) of up to 0.46 mmol/L.

Fortunately, filtered coffee reduces the concentration of Cafestol to such a point that it has no association with raised cholesterol.

But here’s the really interesting thing:

Despite tremendous amounts of confusing and conflicting information, there’s no reliable evidence demonstrating an association between caffeine consumption and atrial fibrillation – a condition that causes an irregular and often fast heartbeat.

In fact, some studies have compared the consumption of 6 cups of coffee a day with 0 cups and found no difference in cardiovascular outcomes.

In fact, some of the studies found the contrary!

Overall, research has found coffee consumption can actually reduce the risk of a plethora of diseases, with one study summarising that consuming 2-5 standard cups of coffee reduces the overall risk of death to a small degree.

This week’s words of wisdom:

“The powers of a man’s mind are directly proportional to the quantity of coffee he drinks.” – Sir James MacKintosh.

P.s. If you’re interested, you can see the impacts of caffeine on various parts of your body on the graphic below. 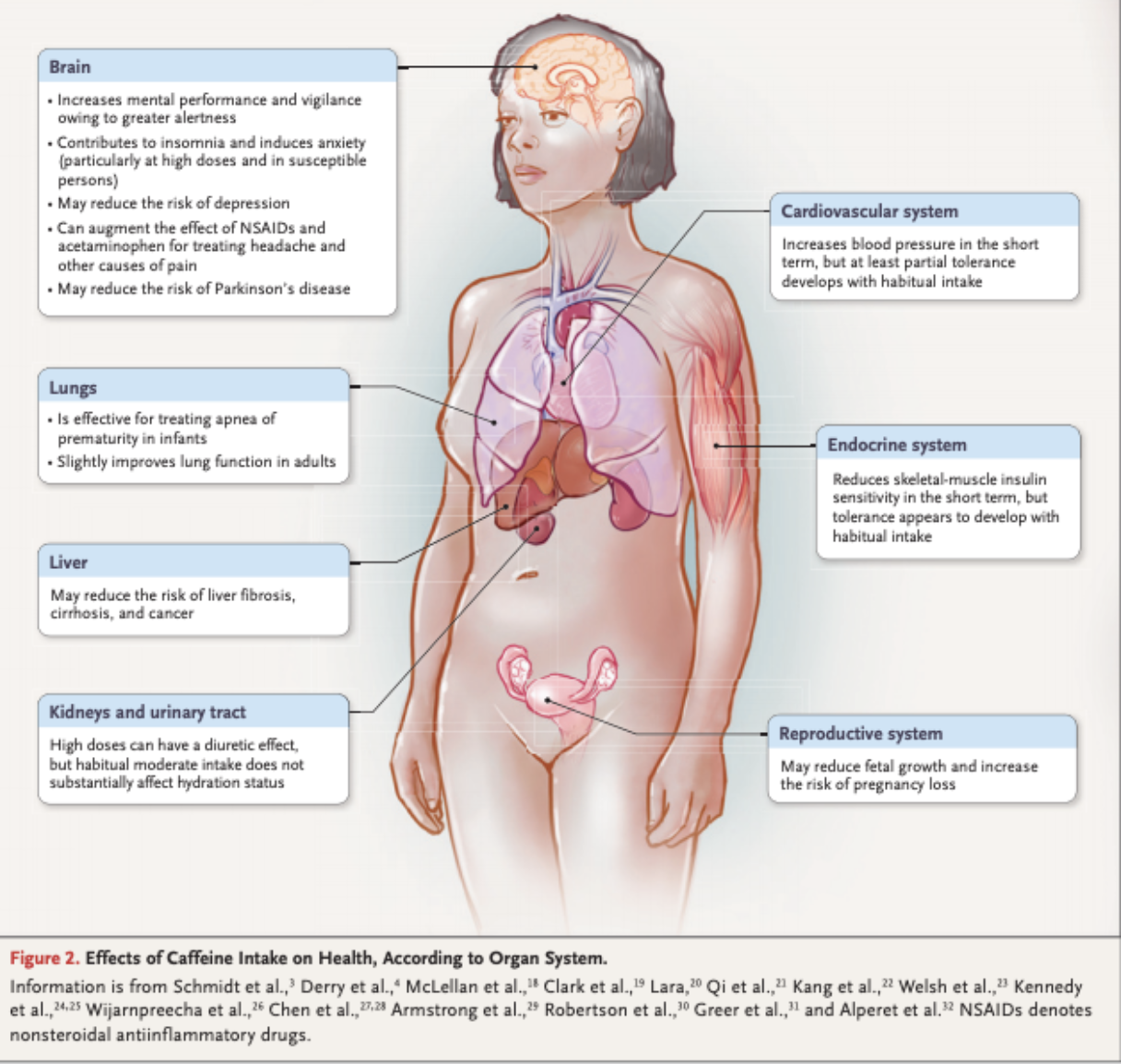